I Sold 21 Copies of a Book I Hadn't Even Written 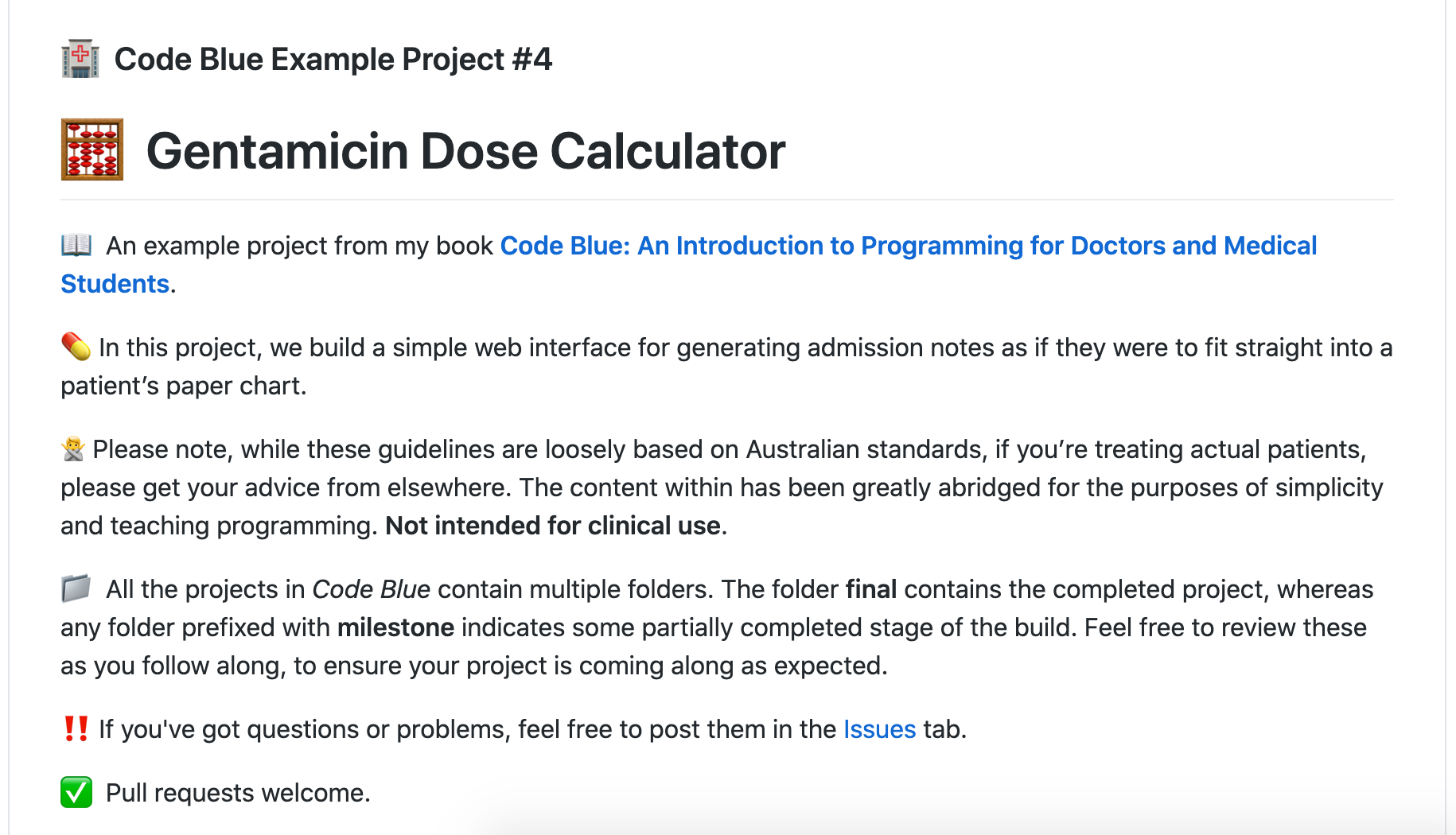 A screenshot of the GitHub Repository of one of the example programming projects from my book, Code Blue.

Last summer I had the pleasure of interning at Healthy.io, an Israeli MedTech startup based in Tel Aviv who've raised more than $90M USD.

While I was there, I learnt a lot about how top-tier companies rapidly prototype and evaluate their business offerings.

One of the tricks I learned was what's known as a "smoke test" or a "fake door test".

This technique allows companies, authors and software developers to determine whether their next product, app or book will sell well before they undertake the financial risks of developing them. This provides the flexibility for the creator to simply abandon their idea or project before they spend many calendar months or many thousands of dollars building something that will inevitably not sell.

2 months after returning to Australia in March, I found myself on annual leave from work as a junior doctor and stuck in a particularly depressing covid-19 lockdown. My partner and I were locked into our house and neighbourhood and our trip to Vietnam was down the drain.

What better time to make use of a smoke test of my own?

A smoke test is when you put a product or feature up for sale before it's been created. The goal of a smoke test is to determine whether people will pay for what you're considering offering.

Let's say you own a toy company and you're considering developing a brand new line of wooden horses. To run a smoke test, you might either create one of the horses as a protoype (or better yet) hire a 3D modeller to create an extensive suite of realistic photos of the product.

You then create a simple web page (known as a landing page) or add a new product page onto your existing site. You list the new product offering with the photos, an appropriate text description, and a price.

You can now run ads against your new product landing page, and measure how many people click "Add to Cart" or "Purchase" using a tool like Google Analytics. It's important that you measure purchases and not any other abstract datapoint like page views, shares, or clicks. At the end of the day, you're trying to verify that your target audience will definitely pay for your potential new product, not just browse the page.

Once someone has entered their card details and hit the "Submit" button, here's where you give them an automated "We're out of stock of this item" or "This item isn't available right now" message. Even better yet, be sure to grab their email so you can sell to them if you ever actually launch your product.

Most people won't even notice if you never "launch" the item. And if they do, that's probably a suggestion that your item is quite valuable to them.

Using this framework, you can generate a fairly robust model about how many sales you generated, how much the ads cost you, and how much money you can hope to make with this potential product. You can even run A-B tests with different price points to determine where your peak profit margin is.

If the numbers look good, go ahead and actually design/manufacture the product. If they're less than appealing, cut your losses and move onto the next product.

It's not just used for books or products though, big tech companies will do this in their apps too. If you're maintaining a software offering of any kind and have a choice between 3 different features you can build over the next 2 months, you can use a smoke test to help determine which to build. Simply create links to Feature X, Feature Y, and Feature Z dotted throughout your application, and just see how many clicks you get. If someone clicks on the link, simply say "Something went wrong" or "That feature isn't available right now".

Once you know how many users clicked on a given link, you know which feature is likely to generate the most interest. Importantly, this technique is brilliant because it depends on actual user behaviour rather than what people would say they might do in a focus group or similar. As we all know, there's often a wide chasm between what we say we'll do and what we actually do.

My Attempt at a Smoke Test

While I was in Israel I got an idea for a fairly unusual sort of book I wanted to write. Having seen the need for clinicians with techskills in the startup scene first hand, I thought healthcare workers might be interested in a book about computer programming that was targeted to their needs.

It's a fairly unusual product though - doctors are fairly busy and historically tunnel-visioned into their craft.

I needed a smoke test to determine whether it would be worth putting in the effort to write the book, especially while working full-time in a hospital, too.

I whipped out an old version of Photoshop and threw together a fairly rudimentary book cover in around 30 minutes: 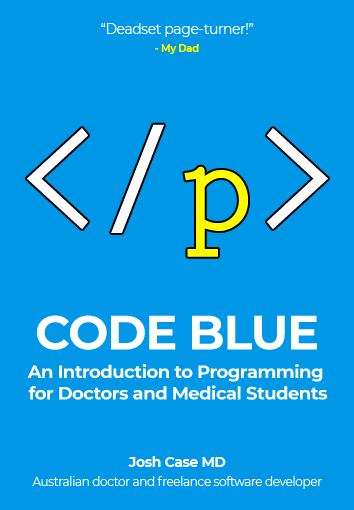 I even included a bit of a joke testimonial from my Dad on the front cover (which has persisted to this day) and no-one seemed to mind.

I then went to the awesome website GumRoad, where you can put anything up for sale in 1 afternoon.

I spent another hour or so mulling about on a text description, and probably another 1.5 hours on a very simple blog post that would be used to promote the product. 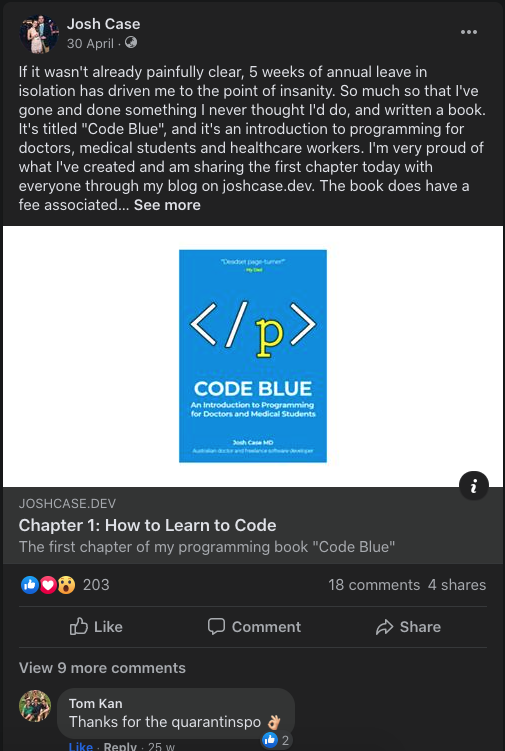 Little did anyone know I had thrown the whole thing together over the day or two beforehand. 😜 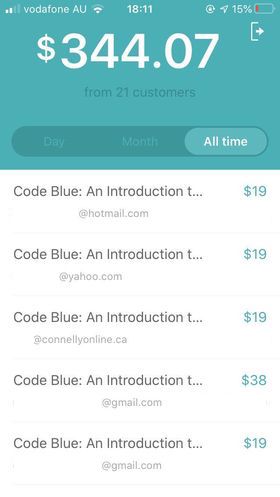 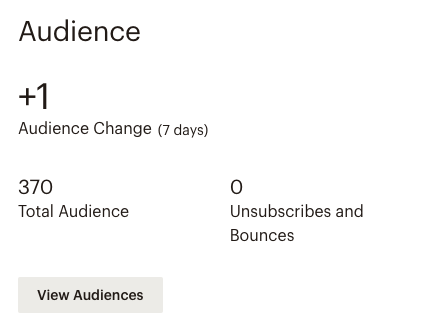 Not exactly world-record breaking numbers, but I'm pretty satisfied with my efforts given I hadn't even written the darned thing yet.

I'd become so addicted to the feeling of waking up in the morning knowing I'd made another $40 or so while I was asleep. Or getting a notification during a stressful work day telling me that someone in Ireland had bought my book. It's a truly empowering feeling that I wish everyone could experience at some point. It's about more than just the $40 - it's also about the promise of freedom that having multiple streams of income offers.

It took about 4 months longer than expected, getting up at 5am each day to write for 1-2 hour before work, but the book is finally ready.

I look forward to a future post detailing the launch process, the results, and my lessons learned.

Code Blue: An Introduction to Programming for Doctors and Medical Students launches on November 6th at 6pm GMT+10. Leave your email here if you don't want to miss out.