The Best Way for Australian Doctors to Claim Overtime

Getting rid of the paper overtime form once and for all 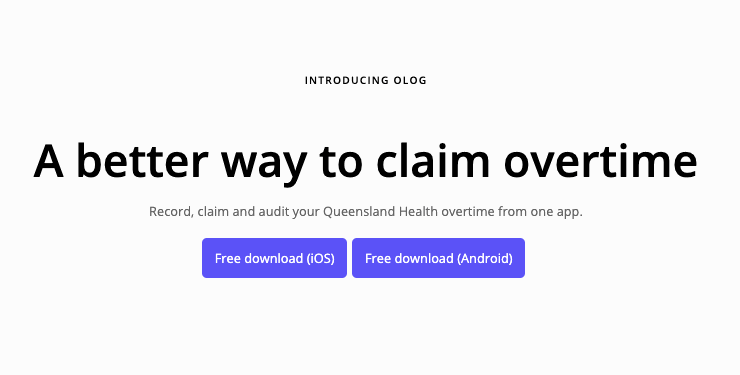 Introducing Olog, the free shift tracker and overtime log for doctors that's designed to help them maximise their income.

If you work at a Queensland Health facility that relies on the AVAC paper form to claim overtime, then Olog is for you. It's available for free, both on the App Store and Google Play. If you work at another hospital site anywhere in the world that relies on a manual paper form to claim overtime, then please get in touch. I'd like to make Olog work for you, too.

In March of this year, a class action lawsuit was filed against multiple Victorian hospital groups that alleges the systemic underpayment of junior doctors.

The suit will allege that junior doctors in Victoria are working up to 25 hours per week of unrostered and unpaid overtime, leading to dangerous increases in medication errors and flawed clinical decision making.

Thankfully, I've never been in a position where my overtime is rejected or unpaid, or even questioned. All my employers to date have been extremely supportive in this regard.

But I do appreciate that not all of my colleagues nationally have the same privilege.

The pending lawsuits made me realise that even our own overtime claiming process has things that I'd prefer to change. Like many of the systems in our hospitals, it depends far too much on:

If we want a better a system for claiming overtime, we're going to have be the driving force behind this change. Hospitals will not build this for us (at least, not at a rate that many of us find acceptable).

If we're going to fix overtime payments, then:

- Discussions about overtime payments should be publicly auditable, not held behind closed doors in clinic rooms after hours.

- If a supervisor intends to decline an overtime payment for any reason, they should be forced to document this in an official way, and junior doctors should be given proof of the same.

- Hospitals should be audited on the rates at which their overtime claims are approved or denied.

- Health services should be obligated to publish the amount of claimed overtime for those whose contracts were renewed compared to those who weren't (to stop them systemically firing those who claim what they're owed).

- Overtime claim processes should be standardised nationally so as to better facilitate benchmarking and auditing.

- Junior doctors should have access to tools that make claiming overtime as logistically easy as possible, and that also support them in discussions around justifying overtime payments.

As long as we're running our overtime systems on paper, there's no money trail, no proof, and no leg to stand on for doctors who get caught up in a sometimes toxic system.

I decided to put my software skills to use to tackle this problem. I've created Olog, the free shift tracker and overtime log, to junior doctors navigate overtime payments. 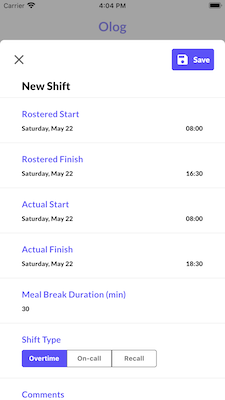 Step 2: Send your automatically filled out overtime form to your email inbox 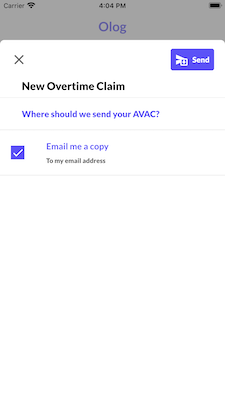 Step 3: Submit your form to your line manager and wait to get paid 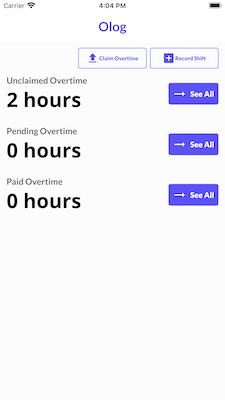 Right now, it's still very much grounded in the Queensland medical system, but the eventual goal is to have:

all available nationally, and updates are going out every single day towards this goal.

If you've got a story to share, or a clunky manual overtime claim process you want me to automate, I'd love to hear from you.

Otherwise, you can check out the Olog Landing Page or the respective pages on the App Store or Google Play.