Going Viral: The Time My App Hit the Top of The App Store Charts

Lessons Learned in a Data-Driven Post-Mortem 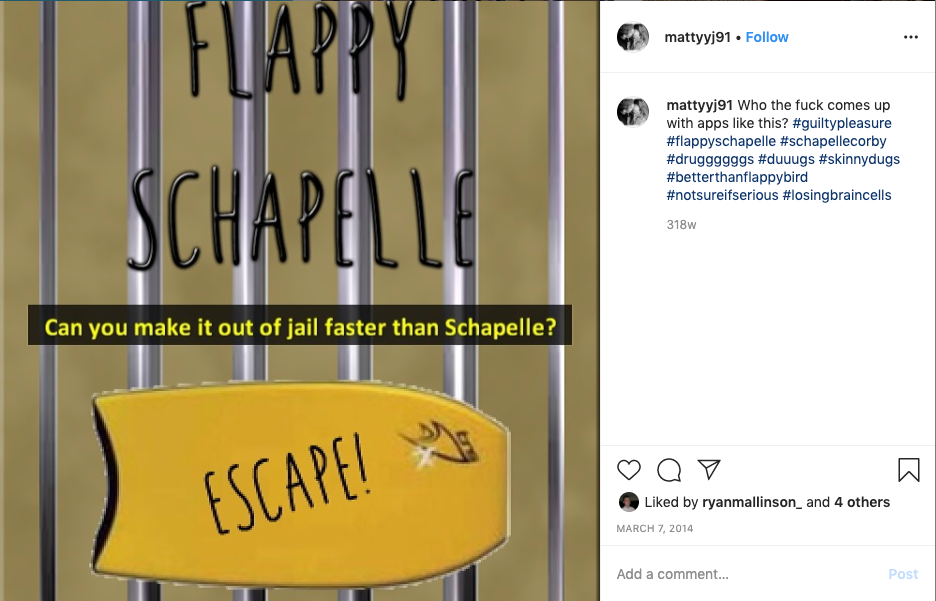 I ask myself the same question every day, @mattyyj91.

Back in 2014, around 18 months before I started medical school, my cousin Tim, my friend James and I decided to throw together a tongue-in-cheek mobile game after a few responsibly consumed alcoholic beverages.

Little did we know at the time, that app would go on to reach the top 10 of the Australian App Store charts, make thousands of dollars in ad revenue, and be downloaded more than 100,000 times - and none of us had ever made an app before.

This post is intended to share what we learned during this crazy time in our lives, and as such will take you behind the scenes on the development process, the financials, the mistakes, the lessons learned and the controversy.

Let's throw back to the February of 2014

The stage was set for us to make a splash.

James and Tim were over at my parents' house in Melbourne (where I was staying at the time) for the express purpose of consuming aforementioned beers. The topic of the death of Flappy Bird and the rise of the dozens of Flappy Bird clones had come up for discussion when a mutual friend of ours suggested that someone ought to make a Flappy Bird x Schapelle Corby parody.

The idea was so hilarious, so ridiculous, so depraved, that no-one would ever consider pursuing it. No-one would spend the time drawing crappy graphics, learning to write mobile apps, and registering a business name to build it, would they?

Less than an hour later, Tim, James and I had whipped out our laptops and had opened Microsoft Paint and were drawing the best graphics we could with a trackpad in one hand and a beer in the other. Flappy Schapelle was born: 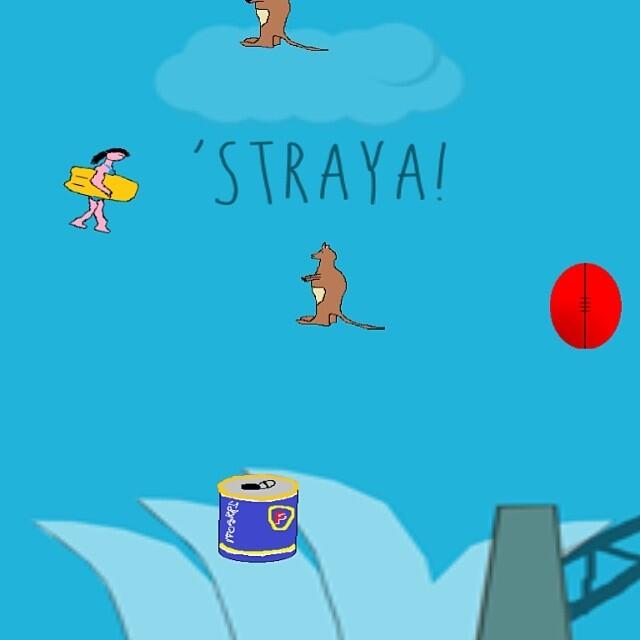 Tim was nominated for an Archibald prize for his artistic depictions of the entities involved, however shockingly was made runner-up to 2014 Archibald Prizewinner Fiona Lowry.

At the time I had been tinkering with web development and some desktop programs, but had never delved into mobile development. Over the next 48-72 hours, I obsessed over guides, YouTube tutorials, books and an ungodly amount of trial and error until I finally had a first version of the app working.

It was crappy. But it was working.

If you read my recent article about how to create and launch your app without knowing how to code, you'd know the steps that I advise people to follow to get their software projects off the ground. Rest assured this was long before that guide existed, and we glossed over or mucked up just about every single step.

However, they say it's important to strike while the iron's hot, and with Flappy Bird and Schapelle Corby's 15 minutes of fame in full swing, our window of opportunity was short.

Somehow we made it to launch day less than 5 days later: 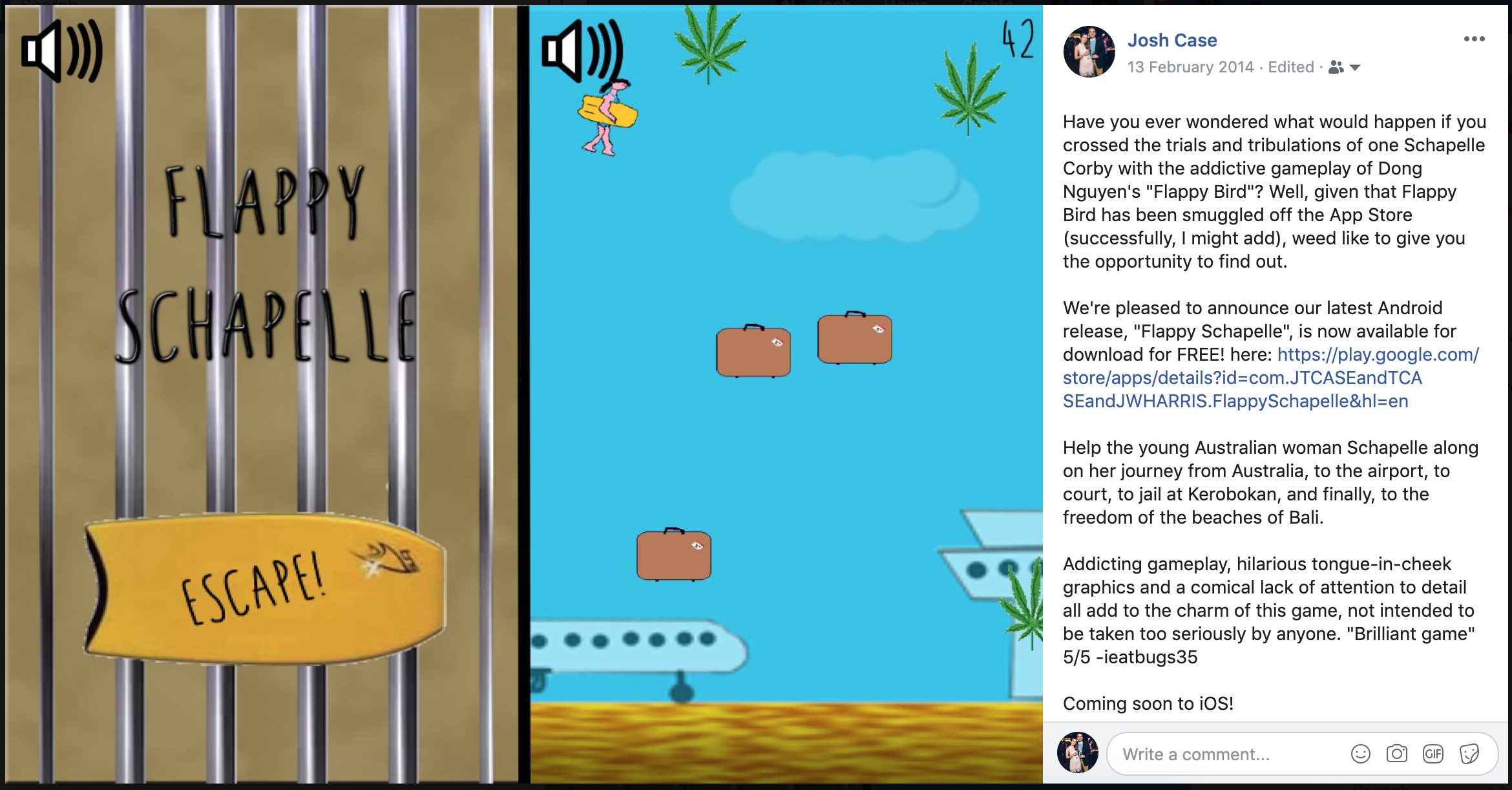 Unfortunately due to us being disorganised, we were only able to ship the Android version of the game at first and had to delay the iOS launch for around a week or so. This was due to significant bureaucratic delays in terms of getting our iOS App Store account set up. This was our first mistake, and likely cost us several hundred dollars, as iOS is where most of the money is for a project like this.

If I had my time again, I would have set up the App Store account as the first job as soon as I knew we were actually going to publish the app. This would have saved us several days and probably allowed us to exponentially increase our momentum.

While we were sorting the iOS issues, the game had meanwhile begun to spread rapidly in the community, and people were very vocal about their views on our game, both good and bad: 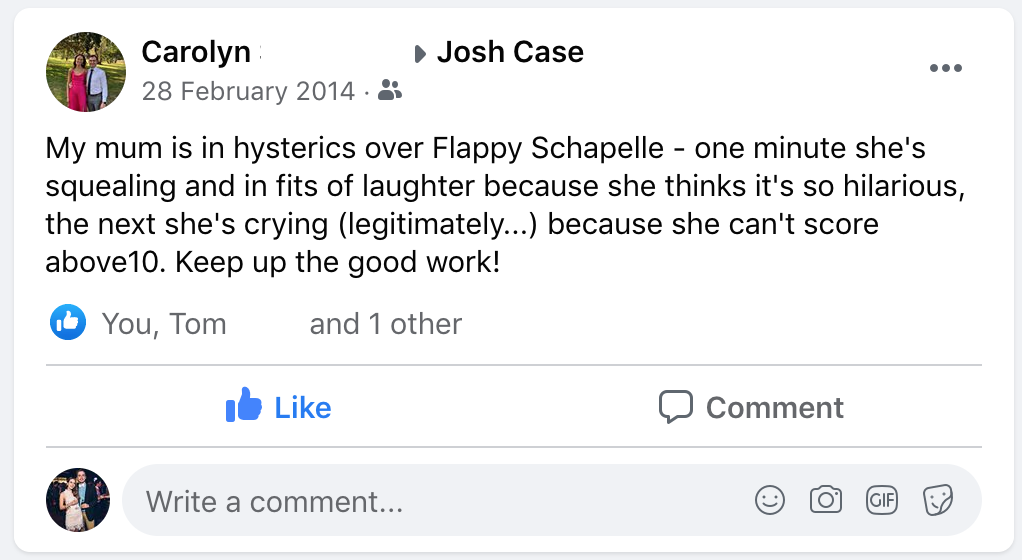 So, the Flappy Schapelle app is genius. Funny shit. #flappyschapelle 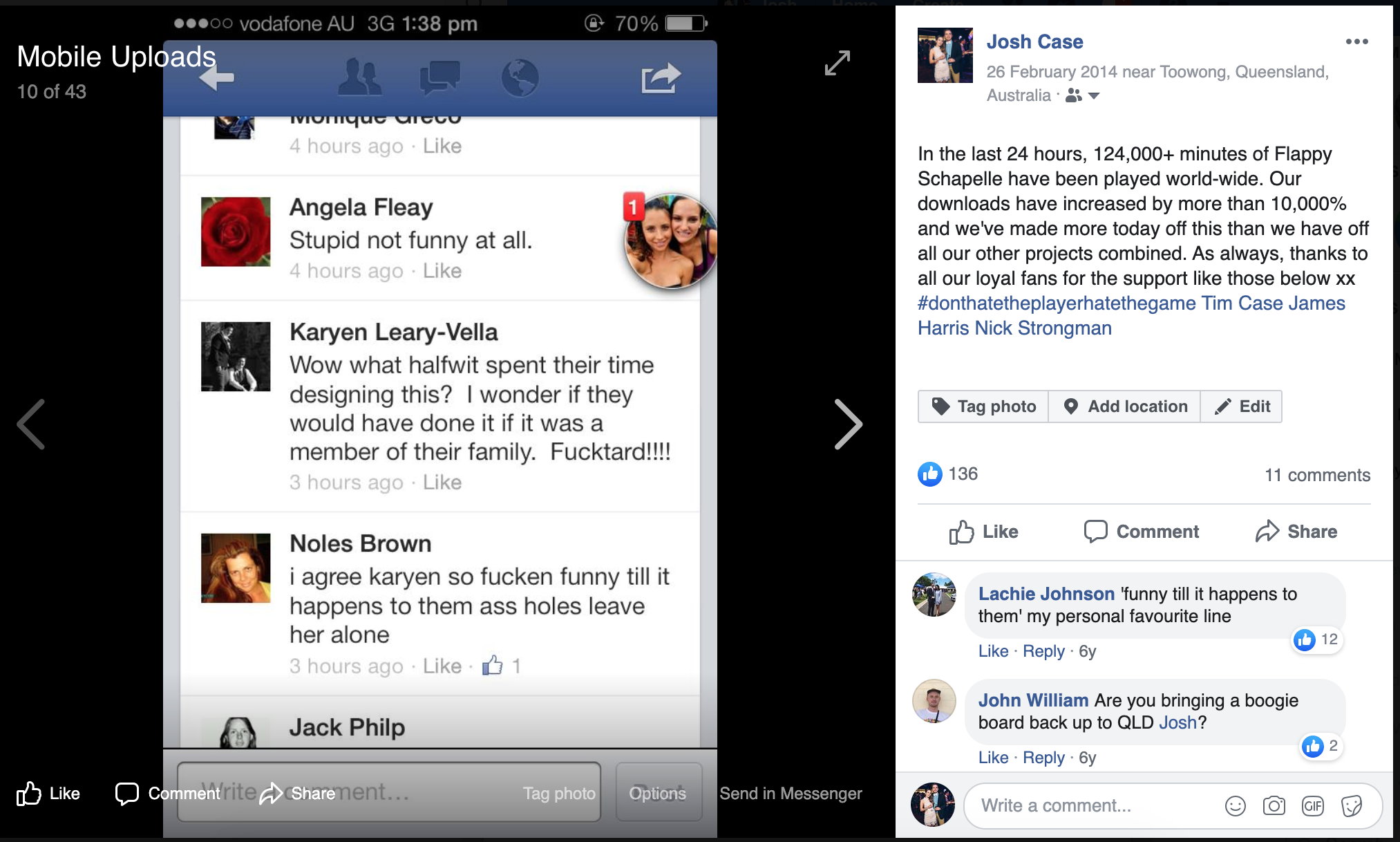 Karyen, I AM the manager, so don't even bother asking.

We also had a few microtabloids lace us with a few criticisms, which frankly, was warranted. The app was low quality, low hanging fruit that was implemented in a clunky and ugly fashion. But that was also a big part of it's charm.

By the time our iOS launch came around, we had almost 10,000 users on the Android platform through GooglePlay. We were very happy with our efforts at this stage - it was, after all, our first attempts at delving into app development - but we hadn't even really hit our stride yet.

It was around this time that we made a short 60 second trailer of gameplay footage and started sending it around to anybody who would listen. After reaching out to many different pages, we found one called "Meanwhile in Australia" that shared the trailer to their 500,000 strong fanbase. (I've tried as hard as I can to find this post but can't - sadly I suspect it's been deleted).

I can remember working at the steak house the night I saw the Meanwhile in Australia post go viral. I would go to the bathroom every 30 minutes and see another thousand likes, comments and shares. I went straight home after finishing work at midnight and worked on implementing AdMob, a platform owned by Google that allows you sell advertising space in your application. (We actually had an ad provider implemented before this, however they weren't that reliable. Another mistake!).

At this point, our downloads started to explode, and so too did our ad impressions. In fact, over the two year lifetime of the app, we sold almost 4,000,000 ad impressions: 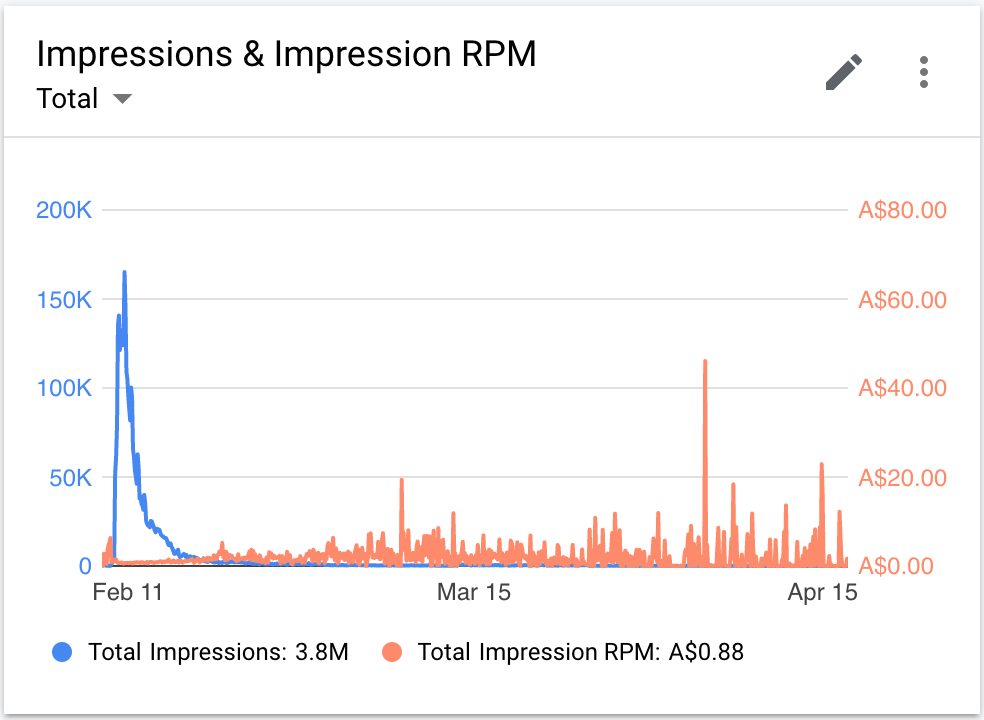 An impression (in blue) is essentially just an episode of someone viewing an ad. The impression RPM is how much revenue you make for selling 1000 impressions.

What you'll quickly realise when you think about this is that the impression RPM only really matters when you have a reasonable number of impressions, so all those red peaks that start around half-way through the graph are really just outliers and should be ignored. On average over the life of the app, we earned $0.88 for every 1000 ads we showed.

By now it was clear that we were inexperienced developers and a few cracks started to show.

We had the idea to implement a world record style leaderboard that increased our virality even more, however, we had no testing or quality assurance process in place, and with the number of pings our leaderboard service was getting (tens of thousands every hour) this was causing some requests to time out. Unfortunately, this also meant that the app would crash as it was poorly written and had not been designed to handle this situation gracefully.

If you look at the blue impression curve in the graph above, you should see a "notch" prior to the all-time peak where the impressions take a dive for a couple of days. This was due to this bug and resulted in a significant financial loss (relative to the income of this app).

We fixed this a day or two later to great effect: 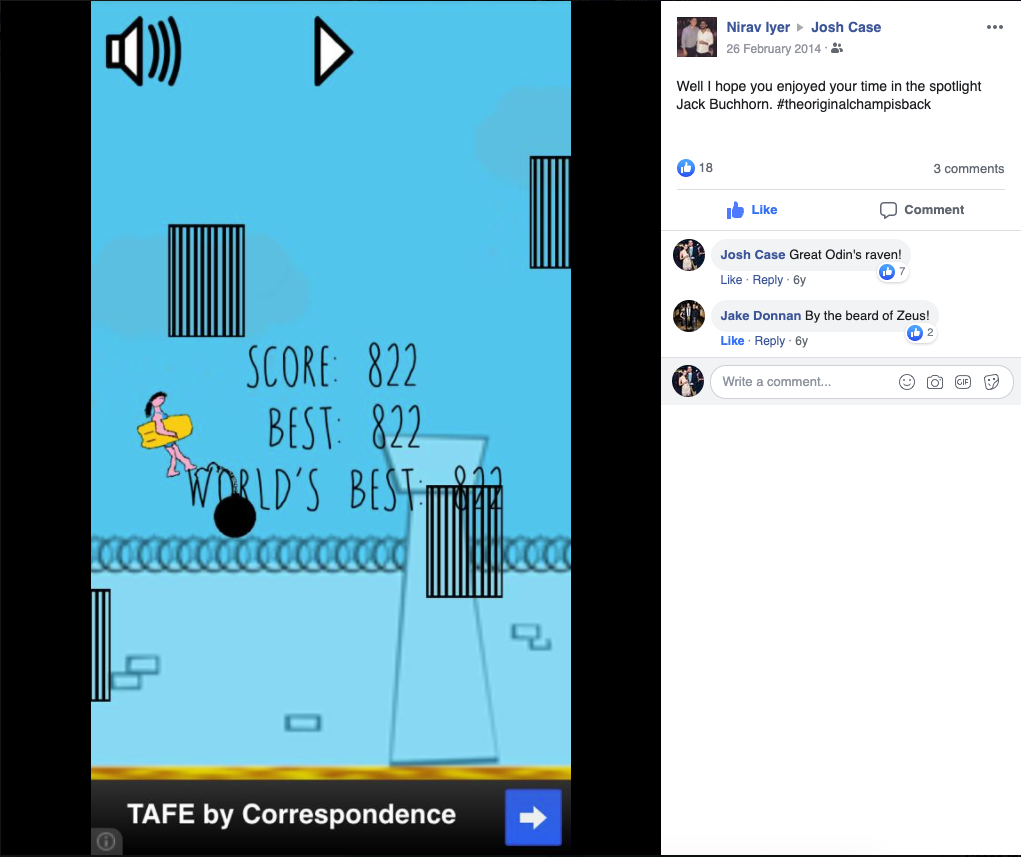 Imitation is the highest form of flattery

We had a 12 year-old fan from Sydney claim to be the creator of the game: 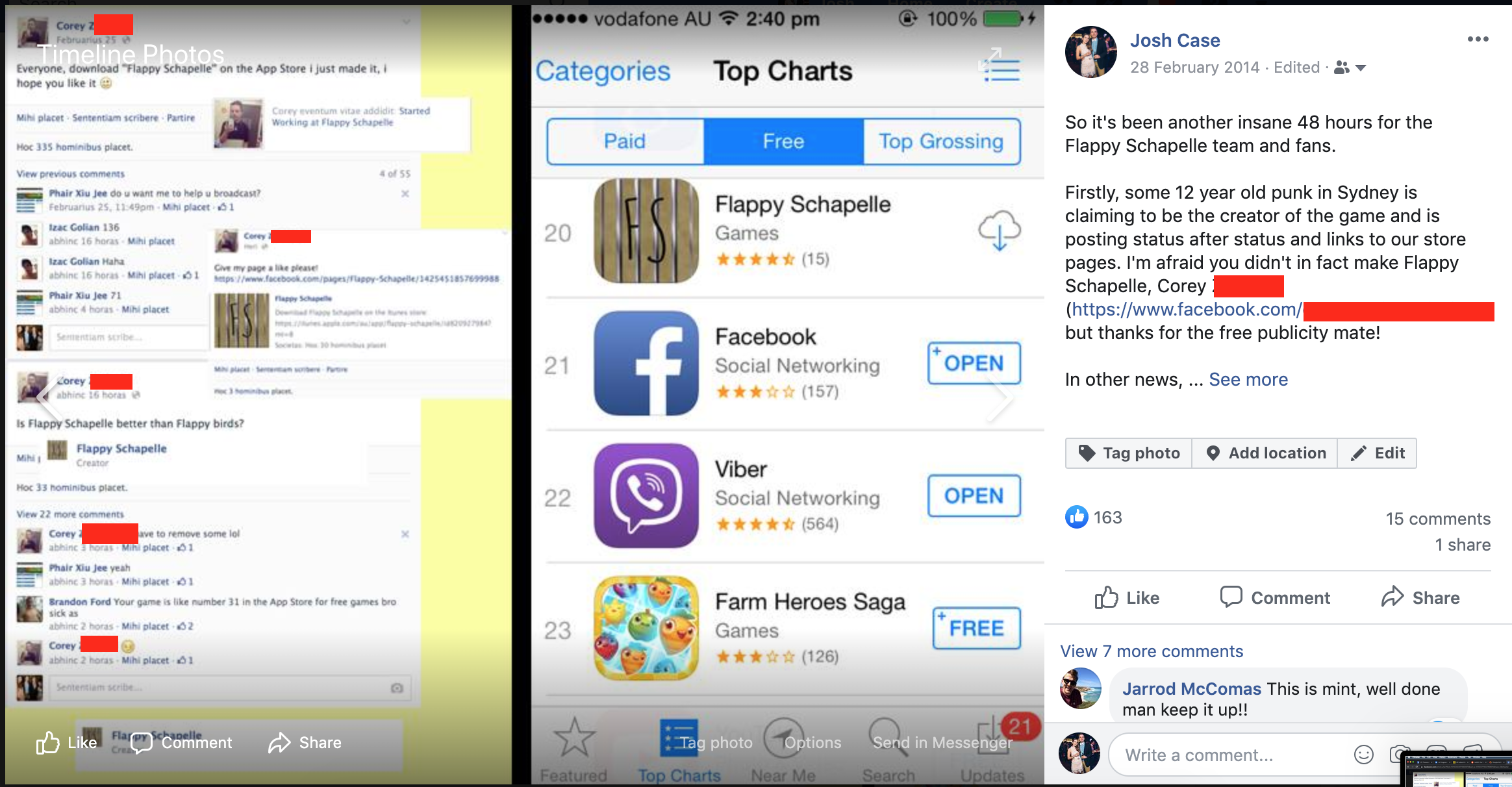 On reflection, I'm not exactly proud of how we handled this (publicly calling him out as a phoney). We probably could have leveraged his interest in the game in some way to provide mutual benefit.

I looked him up on social media in preparing this article, and you'll be pleased to know that 6 years later he's doing well, and there are no signs of Flappy Schapelle on his profile.

What goes up must come down

Somewhere around this point we hit our peak. We had spent a handful of days at #6 on the Australian App Store charts, ahead of apps like Facebook, Viber and Pinterest (which were all popping at the time) and one space behind the juggernaut Snapchat: 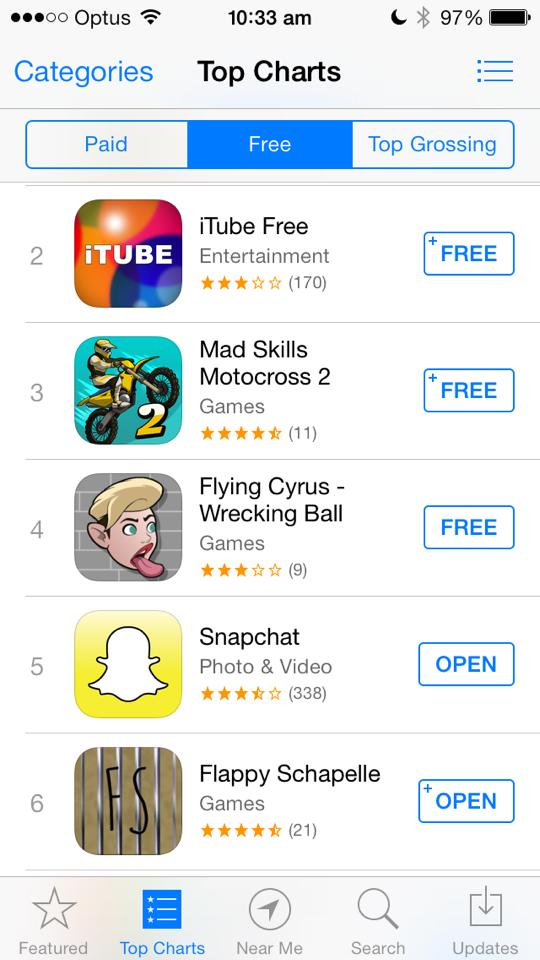 Our downloads peaked at around 6,000 per day for a few days, which might not sound like much now, but back then it was kind of a big deal: 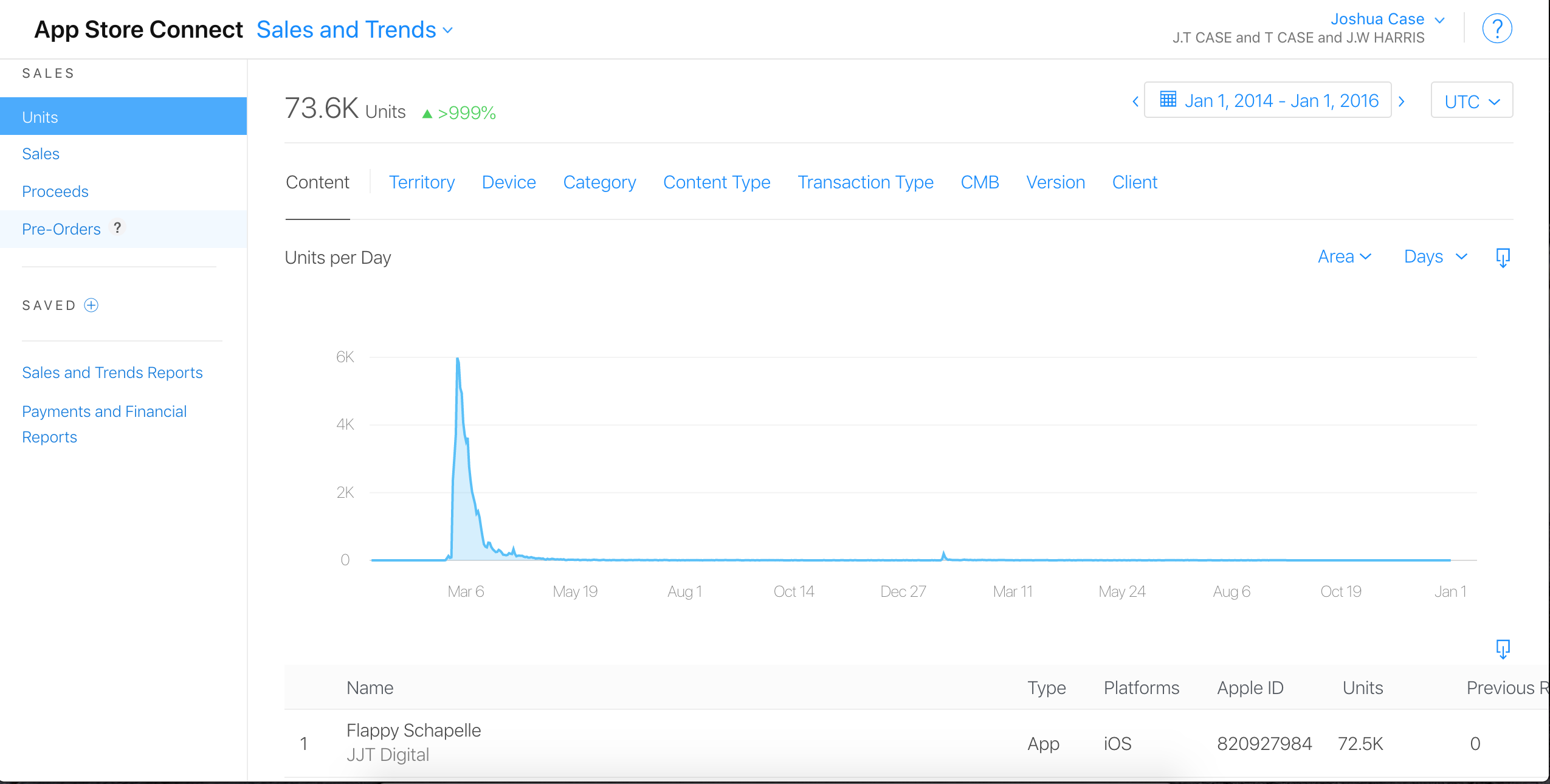 We read leather-bound books, and our apartment smelled of rich mahogany.

Looking back on it now, the shape of that curve told us something everybody already knew: this thing was a fad, and it wasn't going to be around forever.

We had a few discussions about how to better monetise the game, given that our RPM of $0.88 was so low. I can remember James suggesting that we offer the capacity to buy more lives, which I - as a long-time gamer - refused on principle. I can remember thinking it would ruin the integrity of the game by adopting the dreaded pay-to-win business model.

Part of me regrets this decision because:

This project (and others that followed) made me realise that AdMob is great in that it's a fast and easy way to monetise a project, but the pay rates are largely garbage, especially for banner ads. Not to mention it cheapens the whole look and feel of your app. That's why I almost exclusively recommend people find more creative ways to turn coin, as the rates are far better.

But when all was said and done, I had no real regrets. The game was not going to last forever no matter how we diced it.

Over the lifetime of the app, we made somewhere between $3500 and $4000 AUD, which frankly isn't bad for a sideproject concocted on a drunken whim. (Probably close to what I made from the steak house that summer, anyway).

Here's a chart of our daily earnings from AdMob, which doesn't include a small amount of income from the other ad provider: 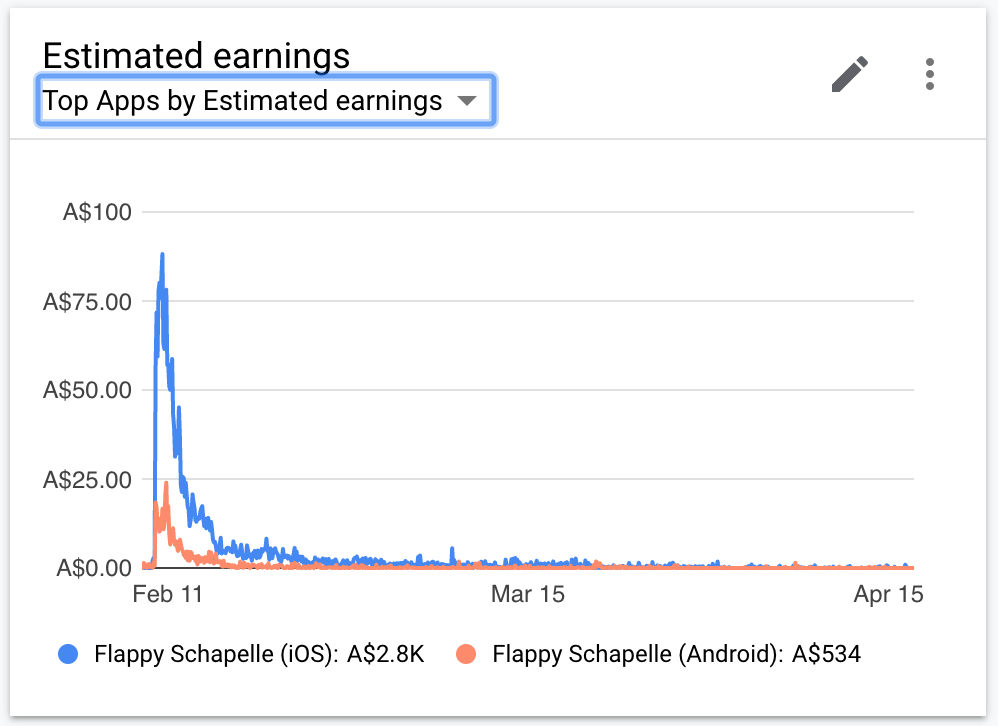 While $4000 AUD isn't enough to be life-changing in it's own right, it certainly did change my life in one way or another.

The feeling of waking up each morning and seeing another $150 in your bank account for doing absolutely "nothing" is one that doesn't get old. In fact, it's empowering.

The accidental success of this side-project put me on a journey that helped me understand the power of software, and the freedom and creative outlet that learning to code can provide for you.

Gradually as the weeks passed, our downloads and play sessions slowed to almost a complete halt. 12 months on we were still making $30 per month or so which was pleasant, but nothing to get too excited over.

In the coming years I tried a few similar "thrown together" projects based on parodies of world events, but quickly realised that going viral isn't something you can just manufacture on demand. What's more, the App Store landscape changed enormously between 2014 and the months that followed, as more and more low quality "shovelware" or "meme"-style apps clogged the charts. The impact these types of apps had shrivelled up to nothing in less than a year.

After the second or third follow-up app flopped (Game of Tones, Halal Snack Pack Attack anyone? 😓), I told myself that I wasn't going to make junk any more. Well, not deliberately, at least.

It became less important to me to make a quick buck shovelling lard and more important to create useful things for the world to use.

By this time I was well and truly into my post-graduate studies and time was at more of a premium. My programming skills had also come a long way in this time and I was capable of much more meaningful things - so I proudly decided to leave the meme-app world alone.